Interreligious Dialogue: The Tool for Conflict Resolution and Reconciliation - The Albanian Case

Meeting at the European Parliament, where Sant'Egidio presented the fruits of 30 years of the “Spirit of Assisi”

At the invitation of the European People's Party (EPP), the Community of Sant'Egidio presented on Tuesday the fruits of thirty years of interreligious dialogue in the “spirit of Assisi” in the European Parliament in Brussels.

“The spirit of Assisi” refers to the historic meeting between leaders of the Christian Churches and of the great world religions, that was called together by Pope John Paul II, on October 27th, 1986 in the city of St. Francis. The Community of Sant'Egidio has since committed itself to maintaining this spirit of fraternal dialogue between people of different religions.

The meeting was opened by the Vice-President of the European Parliament, Antonio Tajani.
In the first panel, chaired by Hungarian MEP György Hölvényi, the main theme was Albania. The last peace meeting “in the spirit of Assisi” was held in September 2015 in the Albanian capital of Tirana. Several panel members of different religions and various political tendencies explained how Albania can be an example for peaceful coexistence in Europe. Among them was also the Mayor of Tirana, Erion Veliaj. Alberto Quattrucci, of the Community of Sant'Egidio, explained that interreligious dialogue is crucial for the construction of the future of Europe. 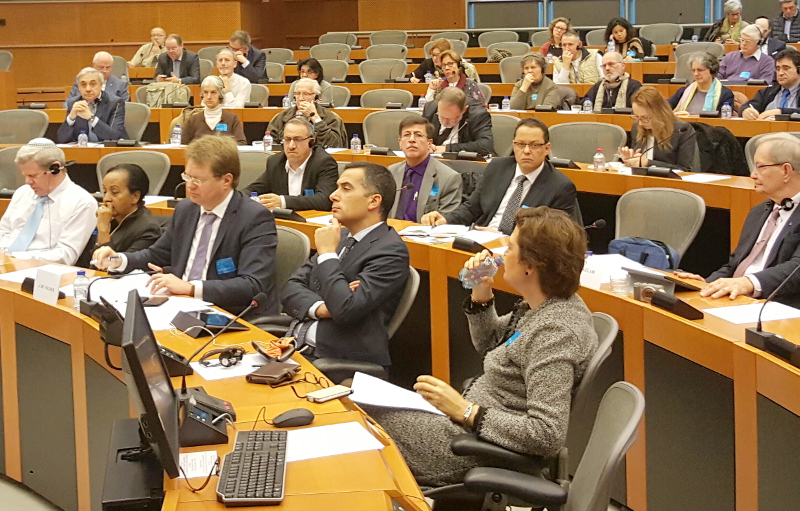 The second panel, chaired by Irish MEP Mairead McGuinness, carried on about the upcoming meeting that will take place in Assisi from September 18 to 20 and where the 30 years of the “Spirit of Assisi” will be remembered. But what are the fruits of dialogue in a world that lives in fear of terrorism and the clash of religions? According to Jan De Volder, the fruits are seen in the prevention of such violence that finally did not explode, but also in the processes of political reconciliation like for example in Mindanao, in the Philippines, or in the Central African Republic. Oded Wiener, coming from Israel, and Abdelmajjid El Najjar, from Tunisia, explained the fruits of the Spirit of Assisi from a Jewish and a Muslim point of view. Fessaha Alghanesh demonstrated that effective collaboration between Christians and Muslims in Sinai can save many people from death.