MENU MOBILE
HOME > NEWS > SANT'EGIDIO AND MOZAMBIQUE, THE STORY OF A PEACE - AND A FRIENDSHIP - THAT TODAY IS 24 YEARS OLD.
PreviousNext

Sant'Egidio and Mozambique, the story of a peace - and a friendship - that today is 24 years old.

From the negotiations for the end of the civil war, to the program for the treatment of AIDS, the civil registration, and the fight against malpractice. Today, alongside the "generation of peace" ....

Twenty-four years have passed since October 4, 1992, which was the feast of St. Francis. On that day, in Rome, the general peace agreement was signed, putting an end to the civil war that had generated so much suffering in Mozambique. A peace born in a small convent in the center of Rome, where a Christian community, still very young, gathered to pray: Sant'Egidio.

In the love for the poor, learned from the Gospel and the example of St. Francis, the Community of Sant'Egidio had learned that war is the mother of all poverty. And it took care of that poor, war-torn country.

Today, that peace is twenty-four years old. We remember in the words of Angelo Romano, "how in 1992 the country was among the poorest countries in the world; in fact, it was the poorest country in the world for a long time. In Mozambique one could not travel, because all the bridges over the Zambezi River had been blown up during the war. Today Mozambique, even though it is going through a difficult time and experiencing a political-military crisis, for many years has been one of the countries with the greatest economic growth in the world, considered in some ways as a model. Elections have been held; two presidents have changed. Important economic resources have been discovered. In short, the country has completely changed. Above all, the population has changed, because more than half of the population was born after '92. So, there is a "peace generation", currently the majority of Mozambicans, who have never known war and do not want to know it".

Sant'Egidio has remained close to the Mozambican people: it has launched a large program to fight AIDS, a campaign for the registration of "invisible" children.

To this extraordinary peace process, the artist Stefano Di Stasio has dedicated a large painting, kept in the Sala della Pace of Sant'Egidio, inspired by the passage from Isaiah 11:6: "The wolf shall dwell with the lamb; / the leopard shall lie down beside the kid; / the calf and the young lion shall graze together..." The protagonists of the negotiation process are depicted embracing each other in front of the church of Sant'Egidio while the dove of peace flies over the African clouds. At the bottom, the lion and the lamb live together while Peace burns the weapons forever. 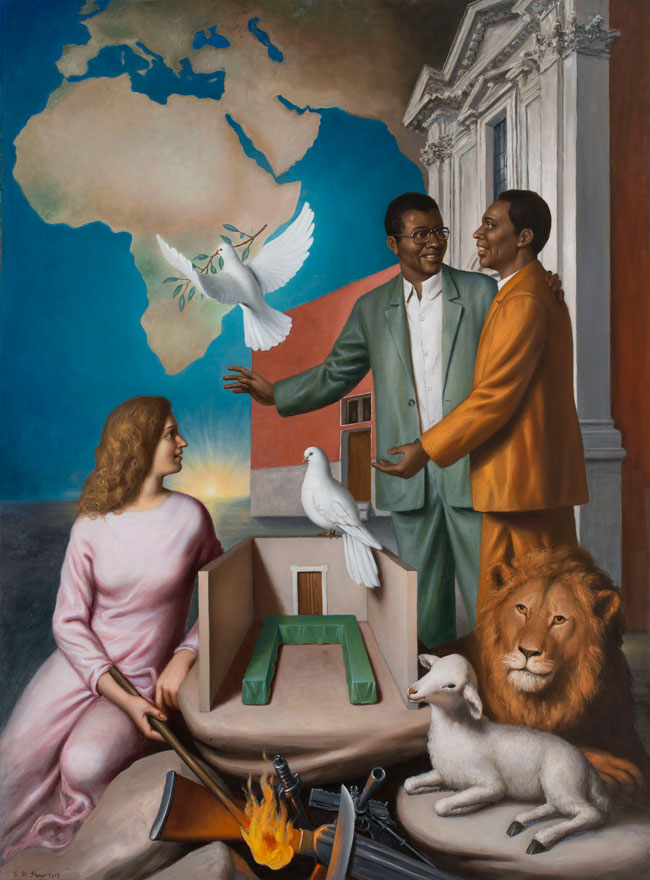 Prayer with the Saints, live stream
read everything
Subscribe to the newsletter