MENU MOBILE
HOME > NEWS > ART AS A TOOL: THE ART OF EXCHANGING WORLDS. A SEMINAR IN LONDON ON COMBINING ART AND DISABILITY
PreviousNext

ART AS A TOOL: THE ART OF EXCHANGING WORLDS. A seminar in London on combining art and disability

ART AS A TOOL: THE ART OF EXCHANGING WORLDS

Through multi-disciplinary interventions, this seminar will be exploring the themes of the exhibition and the project: the question of the confine between normality and diversity, the role of art in the exploration of the world of the excluded, the opportunities for change and overcoming prejudices. 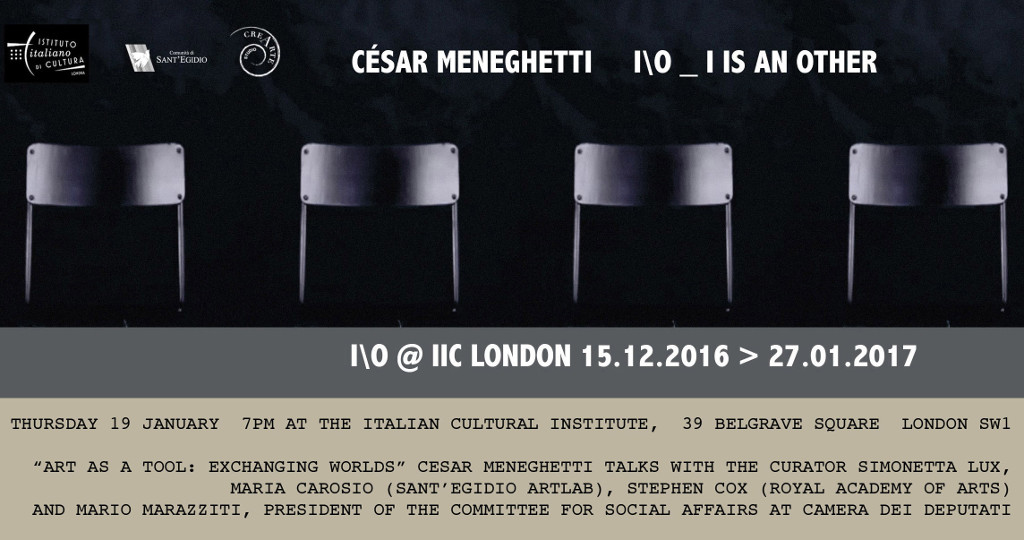 The work/project I\O_ IO È UN ALTRO / I\O_ I IS AN OTHER by the artist César Meneghetti started in March 2010, from an intense relational process and exchange with more than 200 people with disabilities involved in the Art Workshops of the Sant’Egidio Community in Rome.
César Meneghetti interest in the research into geographical, political, linguistic and mental confines, affirms the revolutionary and transformative potential of art, capable of modifying our perception of reality and of ourselves and to offer an opportunity for sharing experiences. The artist states “Art cannot reach its objective if it precludes something or someone, nobody should be excluded or relegated to a land of silence and isolation.”

I\O_ IO È UN ALTRO / I\O_ I IS AN OTHER by Meneghetti is a synergy with the artist and the Art Workshops of the Sant’Egidio Community – Rome which invited him to create one of his projects which combines art and social inclusion. The aim of the Community is to affirm the dignity of the person and the emancipation of people from exclusion. An Italian thin red line which has in the last century linked thinkers such as Nino Costa, Maria Montessori, Don Milani, Franco Basaglia.

After the event in October with L’Atelier dell’Errore and the talk about the Outsider Art with Massimiliano Gioni, which had attracted great attention in 2013 Biennale edition directed by Gioni, this is another important event focussing on the different ways to make a different art.

This event is kindly supported by Crearte-Studio
César Meneghetti is a visual artist and filmmaker. He studied art, design and Cinema in Sao Paulo, London and Rome. He has exhibited his work in over 40 countries and in diverse events. From the late 1990s his work has been characterised by a profound interest in social issue and by constant research into the forms of language. Always attracted to reflection on the concepts of identity and memory, he began to investigate groups, people and unusual genres of “diversity” characterising the global era.
Simonetta Lux Art Critic and Chair of the History of Modern and Contemporary Art at University of Rome "La Sapienza". She created in 1985 and directed until 2010 the Museum Laboratory of Contemporary Art at “La Sapienza”.

Mario Marazziti has been a member of the Italian parliament since 26 February 2013, and most recently he became president of the Committee for Social Affairs at Camera dei Deputati. He was manager for RAI, Italian Public Television Network, journalist (Corriere della Sera), columnist and essayist. He was for several years the spokesperson of the Catholic Community of Sant'Egidio.

Stephen Cox Artist o sculptor Royal Academy of Arts. He trained at the West of England College of Art, Bristol (1964-65), Loughborough College of Art (1965-1966), and the Central School of Art and Design, London (1966-1968) and has since lectured at colleges throughout the United Kingdom.

Maria Carosio Responsible for Art Laboratories of the Community of Sant'Egidio, archivist at the Vatican, editorialist and essayist for several magazines and pubblications.
Free event, booking required: click here >>