MENU MOBILE
HOME > NEWS > 25 YEARS OF PEACE IN MOZAMBIQUE: THE HISTORY OF A COUNTRY GETTING OUT OF WAR AND POVERTY
PreviousNext

25 years of peace in Mozambique: the history of a country getting out of war and poverty 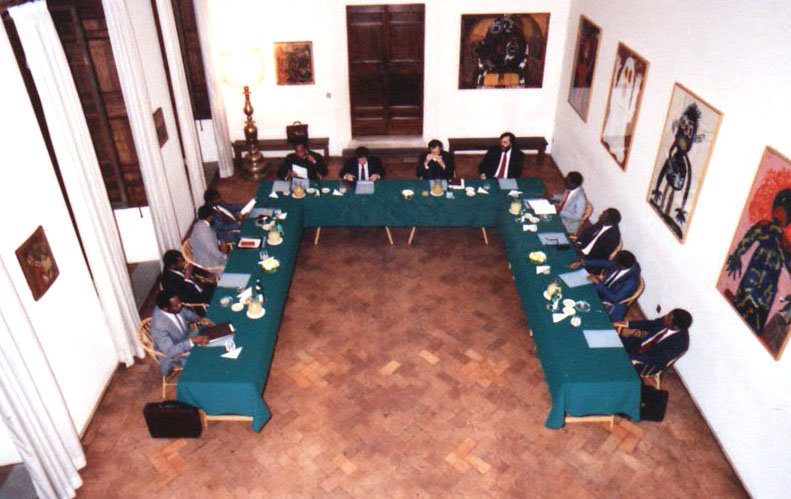 It has been 25 years since October 4th 1992, feast of St. Francis. That day, in Rome, the Mozambican President and Secretary of FreLiMo Joaquim Chissano and  Afonso Dhlakama, leader of ReNaMo, the guerrilla army that since the indipendence of the country was fighting against Maputo's government, signed a General Peace Agreement that ended 17 years of civil war (hundreds of thousands of deaths, 3-4 million displaced people and refugees in neighboring countries).

The signing concluded a long negotiating process, lasted more than a year, that was carried on tat the headquarters of the Community of Sant'Egidio in Rome, in a small and welcoming place, in a garden where banana trees remind of Africa, and a large olive tree reminds that we can start working again after the fireof the war. There, in Trastevere, some members of the Community of Sant'Egidio (the founder Andrea Riccardi, and a priest, Matteo Zuppi, today Archbishop of Bologna), a Mozambican bishop (Jaime Gonçalves, bishop of Beira, who recently passed away) and a "facilitator" of the Italian government (Mario Raffaelli), had patiently made a dialogue among those who fought in the name of ideology and power. They created a negotiating framework in the name of the unity of the Mozambique people, seeking what unites and not of what divides. 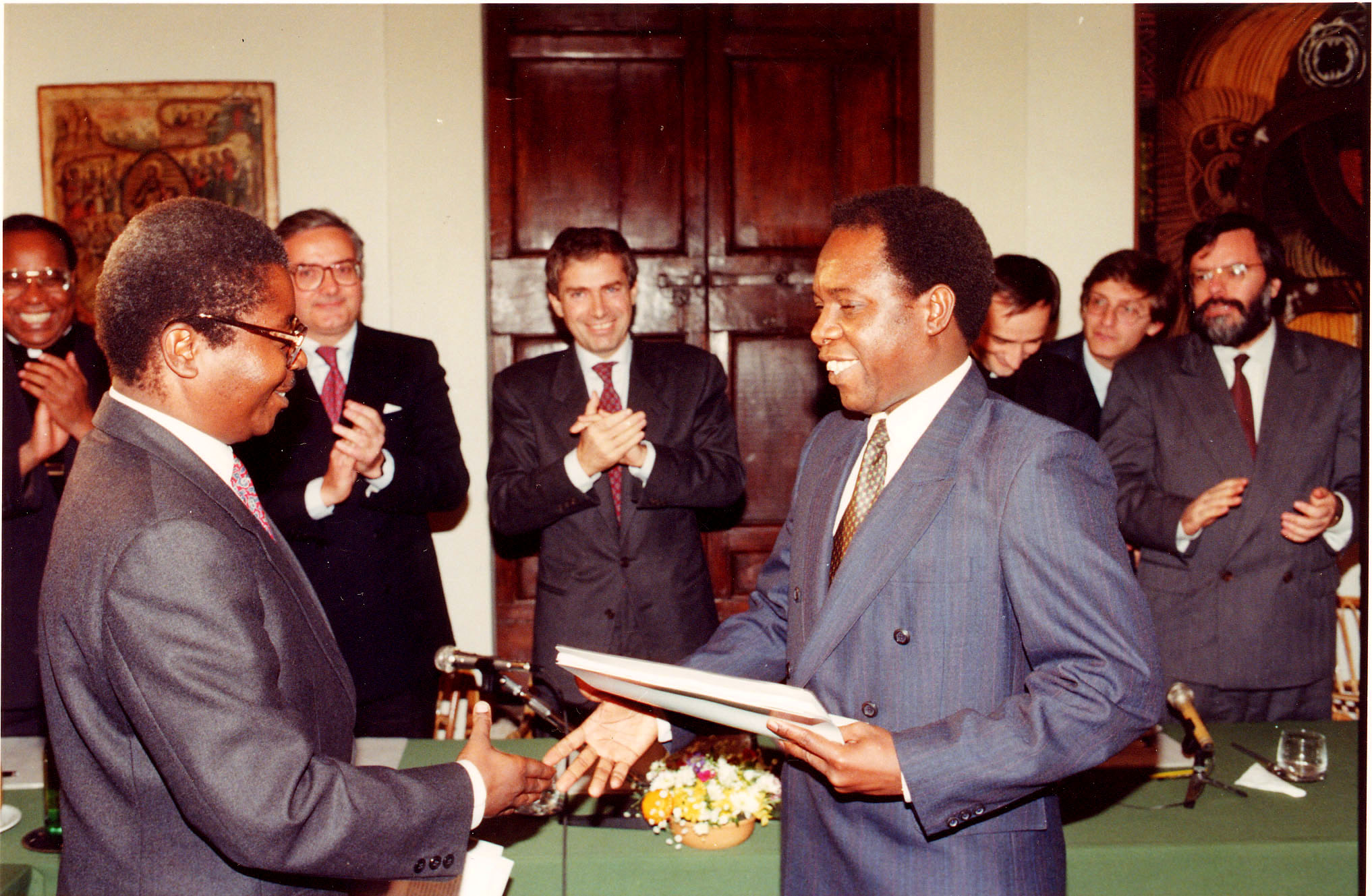 Following the General Peace Agreement, the guerrilla surrended its weapons to UN forces, former combatants were integrated into the regular army, the demining and pacification processes in rural areas started: these steps chenged an armed confrontation between the parties in a competition based on constitutional and democratic rules. The elections in 1994 elections, the first truly free in the former Portuguese colony, ensured the success of the entire negotiating path and delivered to Mozambique a new season, a time of peace.

Peace started a process of normalization of the situation and economic and social growth. A difficult and non-linear path, but also a great success story, an example of how a State can leave behind the enormous difficulties and sufferings of a civil war, to face the complex, but more manageable challenges the economy, international relations in the globalized world, social diversification, and the strengthening of a civilian conscience.

The history of these postwar decades has been characterized sometimes by a bitter political dialogue, for example between 2013 and 2014 Dhlakama, not feeling safe, went back to the forest and forced the international community to a new mediation effort, sometimes by fear, alive in the ruling party, of a democratic alternative, even at the local level, as if it could undermine unity in the country. But these years are also characterized by the acceptance of the constitutional rules by all the presidents: after winning the elections in 1999, Chissano has given up for a third term; his successor, Armando Guebuza, winner in the 2004 and 2009 rounds, left his position at the end of the second term, leaving office to the current president, Felipe Nyuzi.

Meanwhile, the young country cured its own wounds, reconstructing infrastructure and communication network, strengthening school and health systems, although the limits of the sub-Saharan context. In some fields even a continental excellence were achieved. For example, when in February 2002, the first DREAM center for antiretroviral therapy in Africa was opened in Machava, outskirts of Maputo. It is a health center run by Sant'Egidio, but it's not private, as it is linked to the public health system, and therefore it is able to provide free of charge those drugs that in the West saved lives to many HIV-infected people. Mozambique recognized the right to therapy, a frequently violated right, long before many other countries of the continent. Since then, the DREAM program has spread throughout the country: mothers and children free from AIDS are today a sign of hope and resurrection.

Sant'Egidio has been close to Mozambique all these years, in order to gain peace even after the war. A generation that doesn't know the war grew up in the Schools of Peace that Sant'Egidioopened in many cities.

A large youth movement for Peace has spread to schools and universities, propagating a culture of solidarity and gratuitousness, a premise for a pluralistic and peaceful society. Moreover, with BRAVO Programme, the Community of Sant'Egidio could register in Mozambique thousands of children that didn't have a legal identity, in order to protect their civil rights. 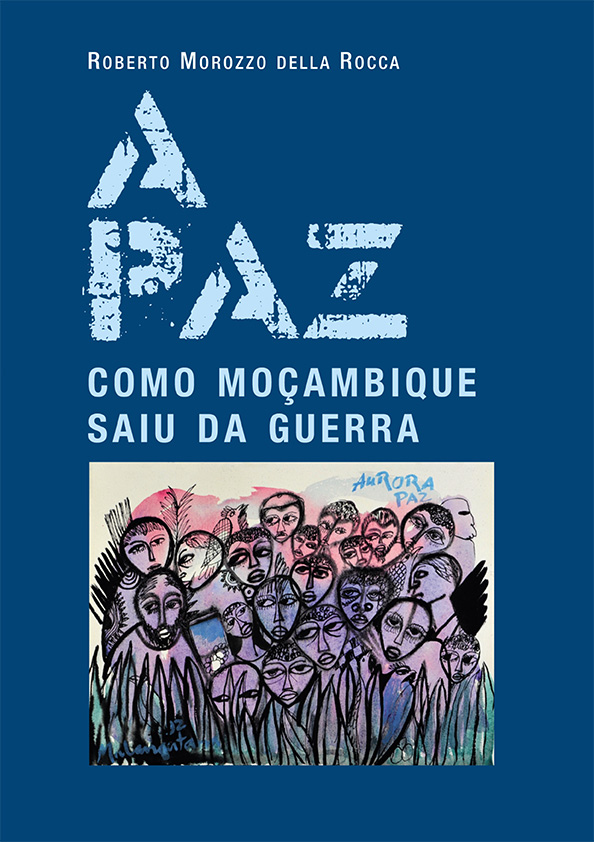 From an economic and social point of view, in 25 years everything has changed. FreLiMo abandoned Marxist ideology and started to support free market. Perhaps too much, so much so as to be seen as a model student of the International Monetary Fund. The party that had led the country to join Comecon, the economic organization of the communist countries, launched a plan of the most extensive and radical privatization, and managed to achieve important macroeconomic results.

Yesterday's nomenclature has quickly become a middle class of businessmen. A phenomenon that strengthened in the 2000s, a time of GDP's great growth, and a new urban middle class grew in several cities, as Maputo and Nampula. With the advantages and disadvantages of this process. Cities have become places full of opportunities, the streets of Maputo are crowded by big new cars. But it is true, on the other hand, that inequalities and corruption have grown, while the spirit of the "days of independence" has left room for a fierce competition.

At the signing of the peace agreement in Rome, Mozambique leaders inherited a country that was almost destroyed by a 30 years long war, first an anti-colonial and then a civil war. Mozambique was one of the poorest countries on the planet, despite the vast potential of rich resources and economic opportunities: huge reserves of coal, natural gas and oil, as well as gold and diamonds. With the liberalization of the economy, investors competed to acquire privatized assets, in order to operate in the energy and mining sectors, and to launch tourist projects on the Mozambican coast. Thanks to them, the country has become one of the so-called "African lions", with one of the most strong and fastest growth among the sub-Saharan countries.

Such a quick process has also shown its limits. The development model has increased the number of well-offs, but also that of marginalized people. And large investment projects linked in particular to the exploitation of the subsoil and the offshore did not have great effects on the situation of emplyment. So today Mozambique faces the reduction of international currency reserves, the collapse of Metical, the national currency and the rise in public debt.

But these are the problems of peace. Which country does not have them?  And so, dear Mozambique, wish you a happy 25th wedding anniversary with peace and many happy returns of the day!