MENU MOBILE
HOME > NEWS > HUNDREDS REMEMBER MODESTA AND THOSE THAT DIED BECAUSE THEY WERE REJECTED. APPEAL OF THE PRESIDENT OF SANT'EGIDIO FOR SOLIDARITY
PreviousNext

Hundreds remember Modesta and those that died because they were rejected. Appeal of the President of Sant'Egidio for solidarity

The people of those that live on the street has filled the Basilica of Santa Maria in Trastevere. Candles were lit to remember the many homeless people that have died in recent years. In the coming days other events throughout Italy

This morning hundreds of homeless people, along with their friends, volunteers, filled  the basilica of Santa Maria in Trastevere for the memory of Modesta Valenti, who died on 31 January 1983 in front of the Termini station after hours of agony because the ambulance refused to take her to hospital due to being dirty.  During the celebration, presided over by don Vittorio Ianari, her name was remembered along with those of many that, over these years, have died on the street. And before the icon of Mercy, in the heart of this Jubilee, many candles were lit in honour of those that have "fallen" due to not being welcomed. Soon afterwards, lunch was offered to all participants as a sign of solidarity. 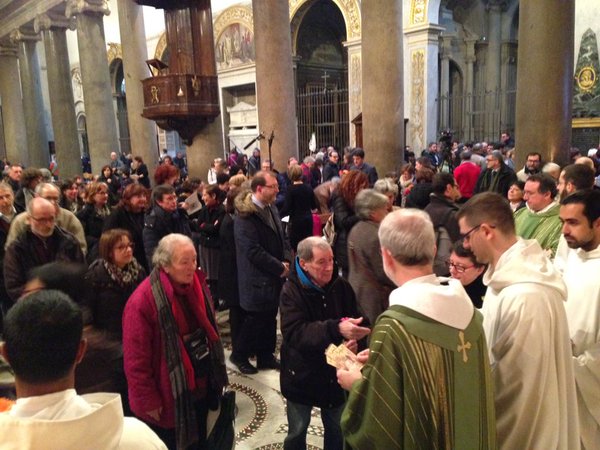 The president of the Community of Sant'Egidio, Marco Impagliazzo, launched a strong appeal to all citizens: "It is possible to help, anyone can lend a hand to those that, because of the difficulties of life, happen to live on the streets. Let's say our “no” to indifference, and we invite all to a solidarity that can protect the lives of the homeless and make our cities more human". Impagliazzo will go this afternoon, at 16, to the plaque commemorating Modesta Valenti, in the place where she died at the Termini station.

The appointment of Santa Maria in Trastevere is just the first of a long series: in the coming weeks, until the end of winter, in other neighbourhoods in Rome and in many Italian and European cities, there will take place other acts of remembrance of those that die on the street, promoted by the Sant'Egidio Community.

Prayer of the Holy Cross
read everything
Subscribe to the newsletter