MENU MOBILE
HOME > NEWS > EMERGENCY BURUNDI: DEPARTURE OF ANOTHER CONTAINER OF AID FOR THE VICTIMS OF THE FOOD CRISIS
PreviousNext

Emergency Burundi: departure of another container of aid for the victims of the food crisis 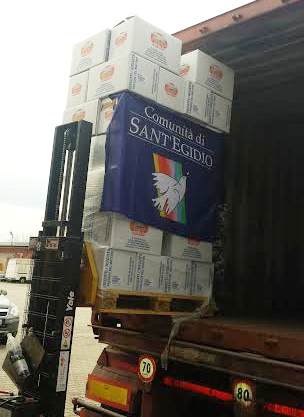 On Tuesday 9 February,  from the Eco-solidarity City of Rome, the place of solidarity in which the Community of Sant'Egidio collects food, clothing and other products to be distributed to the poor, a container of food aid departed intended for the weaker sections of the Burundian population, victims of a crisis that has affected the country for months, of which many times we have given the news on the website and that, unfortunately, it continues to escalate more and more. Today, the food crisis is evident in every corner of the country. OCHA, the UN Office in charge of the Coordination of Humanitarian Affairs estimates that about 700,000 people in Burundi lack the food they need. This is 7% of the population of this small and overcrowded country (400 inhabitants per square kilometre) where 80% of the inhabitants live below the poverty line and that, already before the crisis, was suffering from a state of chronic malnutrition that affected one in two Burundians.

The container, which was also achieved with the help of the World Food Program Italia, departed loaded with 2,000 kg of rice, 1,000 kg of sugar, 3,000 kg of pulses and 2,000 kg of of high-energy biscuits for the port of Civitavecchia, and it will take about 35 days to reach its destination. The local Communities of Sant'Egidio have been able to distribute about 2,000 food packages to the population from September to now, thanks to the online collection launched on the website. The distributions were carried out in the various districts of the capital, Bujumbura, and reached particularly children and the elderly. The arrival of the container will allow to deliver food also to the many poor people living in other parts of the country, in the various cities where the Community of Sant'Egidio is present.