MENU MOBILE
HOME > NEWS > IN ASSISI NOT A COMMEMORATIVE EVENT: PEOPLES AND RELIGIONS, IN DIALOGUE FOR PEACE FOR 30 YEARS, LOOK AT THE FUTURE OF THE WORLD
PreviousNext

In Assisi not a commemorative event: Peoples and Religions, in dialogue for peace for 30 years, look at the future of the world

This is what Marco Impagliazzo has explained at the press conference of presentation of the International meeting "Thirst for Peace. Faiths and Cultures in dialogue", in which also pope Francis will participate 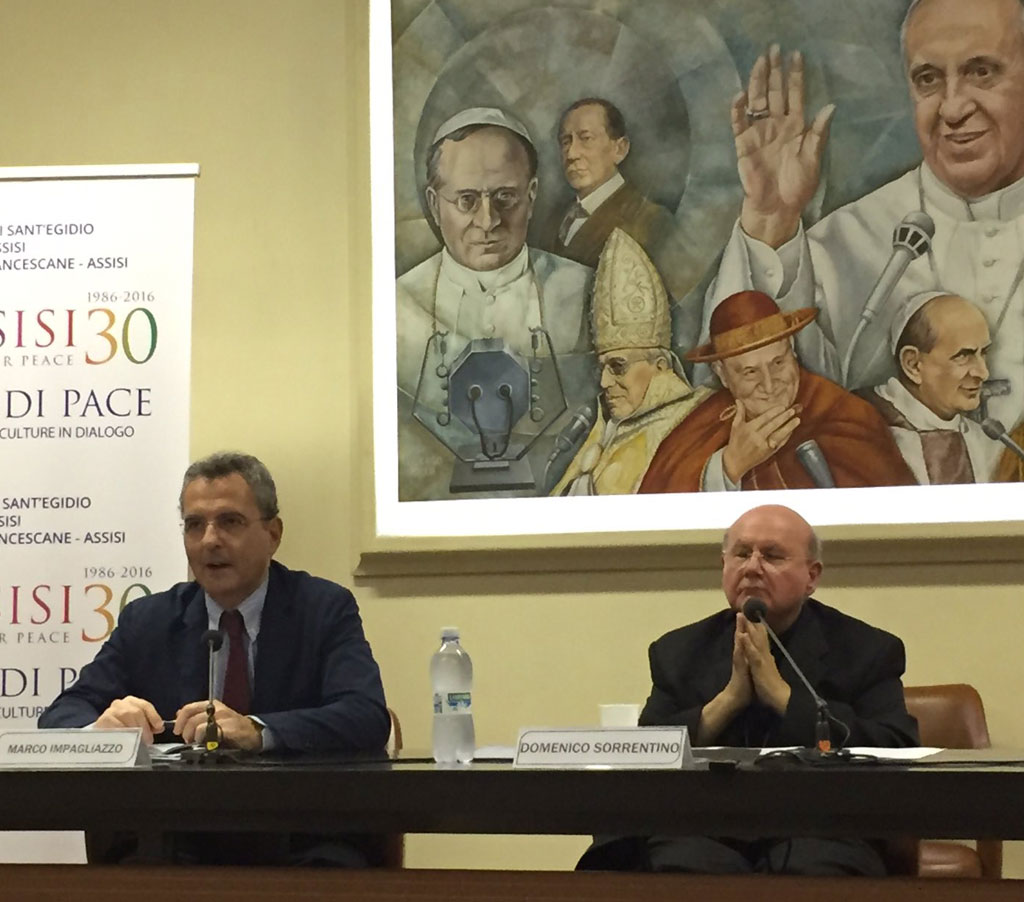 After the World Day of Prayer in Assisi, summoned by St. John Paul II on 27 October 1986, the Community of Sant'Egidio has picked up the final invitation of the Pope in that historical meeting of World Religions: "Let's keep on spreading the message of Peace and living the spirit of Assisi". Since then, during 30 years, the Community of Sant'Egidio has chosen to keep the "Spirit of Assisi" alive and growing. Today  we are happy to reach this milestone of the 30 years, but "Thirst of Peace. Faiths and Cultures in dialogue", that will take place 18 to 20 September in Assisi, will not be a commemorative event. It will be rather telling the history from which so many positive novelties have developed. From the fall of the Wall in Berlin, just three years later, to the peace in Mozambique: and indeed in one of the meetings in the Spirit of Assisi the bishop of Beira, Jaime Gonçalves, asked if we could undertake to stop a civil war that had caused one million deaths. Thus, on 4 October 1992 the peace agreement was achieved, signed in Rome thanks to the mediation of Sant'Egidio. But in 1994 the same request came, to us Christians, from a group of Moslem leaders, to help Algeria, victim of a bloody civil war: one year later the "Platform of Rome" was signed for a pacific solution of that crisis.

The same can be said for so many other Countries along 30 years, from Ivory Coast, that Western African Country that has experienced from 2002 to 2011 being split in two, to Guinea Conakry or to Guatemala. Together with so many leaders and representatives of World Religions we have realized that the Spirit of Assisi could emanate an energy of peace, beneficial for the World. Without forgetting his/her contribution to the rapprochement among the Churches: the meeting of 1998 in Bucharest opened the path for the visit of St. John Paul II in Romania on the following year, first time for a Pope in a Country with orthodox majority.

Today we witness different problems: we have entered the era of the globalization and we must face different dangers, like that of terrorism. But in our time, the Spirit of Assisi is precious for de-sympathizing of religions from violence and for letting new alliances raise for peace. This is important for everybody. We think particularly of Moslems, with the great schools of historical Islam that face radical and violent interpretations of their faith.

With the inauguration of the meeting "Thirst of Peace", on September 18, through the personalities that will intervene, we will have some synthesis of the problems and the hopes of the whole world: in fact, at the presence of the President of the Republic Sergio Mattarella, the patriarch of Constantinople Bartholomew I, that originates from Turkey, will have floor, together with the President of the Centrafrican Republic, who has seen their Country set out on the path of pacification indeed thanks to the role developed by the Christian and Moslem leaders and thanks to the visit of Pope Francis, who has chosen to open in Bangui the first Holy Door of the Jubilee of Mercy.

There will be the Speaker of the National Assembly of South Africa, Baleka Mbete and the archbishop of Rouen. This one delivered the breviary of father Jacques Hamel, the 86 year-old priest that this summer has been killed in France while celebrating the mass, in the basilica of St. Bartholomew on the island, the very church that St. John Paul II wanted to entrust to the Community of Sant'Egidio for the memory of the new martyrs. Also Msgr. Domenico Pompi is going to participate, the bishop of Rieti, diocese that is suffering for the recent earthquake in central Italy and Cèsar Alierta of ProFuturo, the Hispanic-Argentinian association that cares, through some projects, of education in Africa. Furthermore, the refugees who reached Italy via the humanitarian corridors promoted by Sant'Egidio together with the Valdensian and the Evangelical churches. They will have lunch with Pope Francesco, whose visit is for all of us source of joy and encouragement to keep on walking in the Spirit of Assisi.

In representance of the world of the humanistic culture looking for peace will be present, among others, the philosopher Zygmunt Bauman, but also many Nobel prizes, including two from Tunisia, a Country that has seen a positive outcome of the Arab Spring. And this is just about the inauguration. Furthermore, until the morning of 9/20, 29 panels will be held, with focus on so many different realities of our World. Substantial is also the delegation of the Hebrews, with Israel Lau, survivor of the Shoah, who will meet the young people. Popular participation will be important: thousands of people from Europe have already registered to the event and so far, 511 representatives of World religions, of the world of culture and of the institutions are expected to participate in "Thirst of Peace". They not only witness the numerical growth, in comparison to the less than one hundred of 1986 but also the heartly support to the "spirit in Assisi", trusting it as the main path to follow for the future of religions, of peace, and of the world.