The book by Francesco De Palma, Il prezzo di due mani pulite. Un giovane contro la corruzione nella Repubblica democratica del Congo (Milano, Paoline, 2015) narrates the story of a young Congolese customs officer in Goma, Floribert Bwana Chui, who was murdered for not succumbing to corruption. Knowing such a story helps us understand the new forms of martyrdom: it was a silent sacrifice, so far away from the focus of the media, which however might shake the social and political life of those countries where corruption has become customary. Pope Francis too confirmed that during his trip to Africa in 2015, when a young woman asked him: "Can corruption be justified because everyone is corrupt? How can we be Christians and fight the evil of corruption?" In his reply, the Pope stated: "Corruption is something that gets inside us. It's like sugar [...]. Every time we accept a bribe, we destroy our heart and our homeland [...]. As in all things, you have to start: if you don't want corruption, start now! If you don't start, your neighbour won't start either." Speaking to young people, during the visit, he added: "Boys and girls, corruption is not a life journey: it is a journey of death!” (Pope Francis addressing the youth in Kasarani Stadium, Nairobi (Kenya), 27th November 2015; see vatican.va/ 27 novembre 2015).

Who was Floribert? Francesco De Palma tells Floribert Bwana Chui bin Kositi’s story through the intricate events of contemporary Congo. His short story is full of faith: the scenario was a humanly rich land with a beautiful landscape, yet with a complex and troubled political life. Floribert was born on 13th June 1981 in Goma, in the eastern Democratic Republic of Congo, on the border with Rwanda, and grew up in a time with no peace, due to two recent bloody wars. He was killed in Goma, on 7th July 2007, for having blocked the passage of deteriorated foodstuffs, harmful to the health of the population. He died at the age of 26. The book Il prezzo di due mani pulite collects the witnesses about Floribert: he is remembered as a high-minded person who never stopped believing he could change the world through faith in Christ. He was convinced that “no one is so poor that they can’t help someone poorer”. Little by little the reader is led to contemplate the growth of an inner strength in the protagonist’s life which drove him to commit to the School of Peace of Sant’Egidio, and to the Baraza orphanage in Mabanga district.

Floribert believed in the strength of reconciliation which fosters the encounter among people. He did not neglect his education, which completed with a degree in Economics in 2006, while he was assisting street kids too. Then he got a job in Kinshasa, at the Office Congolais de Contrôle (Occ), the Congolese agency that checks the quality of the goods which go through Congo. Soon after Floribert was transferred to Goma, where his parents, his fiancée, his friends and so many street kids he knew lived. There his responsibility increased, fist of all, before his conscience as a believer: doing his job he felt that people’s life and health depended on his choices. In his capacity of claim agent he had to impound and destroy the foodstuffs which get into Congo coming from Rwanda through the Goma customs barriers without the health and commercial requirements existing under the law. Honesty, nourished by faith.

Floribert found courage in faith. In the pages of Floribert’s Bible a passage is marked which must have inspired him: “He answered them: ‘Stop collecting more than what is prescribed’. Soldiers also asked him: ‘And what is that we should do?’ He told them: ‘Do not practise extortion, do not falsely accuse anyone, and be satisfied with your wages” (Luke 3: 13-14). That was a moral imperative for him: do not collect more than what is prescribed. He was firmly convinced of that because of his faith. So, that way everything was so simple: an honesty revival. The silent revolution of the honest people can start from there. Floribert’s story teaches that if no one stands against corruption the society can’t survive. The greed for money is the root of corruption which leads to look down on law, to sale oneself, to kill the honest ones.
Between the end of June and the beginning of July of 2007 Floribert confided to a friend: “I’m under pressure. But I don’t want to give in. If I didn’t destroy what is harmful to many people’s health, if I accepted to be corrupted, then it would be like I betray everything I believe in, it would be like I accept my own destruction. So I’m going on: I stopped a quantity of damaged rise. I can’t put the people at risk”.

He overcame fear with the song La résurrection pour l’ Afrique, dear to the Community of Sant’Egidio which he was part of. The African bishops too in 2003 wished that the Christians were “heroes of the bloodless fight for the national reconstruction”. Particularly, for the Congolese bishops the ‘national reconstruction’ must go through the fight against corruption. That is also a Christian fight, fought with the weapons of faith only: friendship, reconciliation, truth, responsibility, construction of the common good. Floribert was walking in faith on the path led by the Community of Sant’Egidio’s charisma. He had been attracted by the strength of dialogue which had been able to gain peace in Mozambique. “The Community managed to reconcile those who had been fighting one another for years”. Such a success gave him the force to address the youth of Kigali (Rwanda).

In his friends’ hearts
In the book we find the witness of Trésor, one of Floribert’s brothers, who tells that he never gave in to blackmail: “They wanted to trade damaged foodstuffs avoiding their destruction. They offered him money. He refused. Then they threatened him. Floribert mentioned that to me. But he said he would have never accepted money putting someone else at risk: because those who had eaten that damaged food could have died”. Floribert told Sr Jeanne-Cécile Nyamungu that “they tried to corrupt him because they wanted him not to destroy the damaged food. They offered him 1000 dollars, then more, up to 3000. But he refused. Being a Christian, he couldn’t accept to put many people’s life at risk. I told him he did well: behaving like that he was not an accomplice of evil. He added: ‘Money will soon vanish. But what about those people, if they had those products? What would happen to them?’. And ‘Do I live in Christ or not? – he said – Do I live for Christ or not? That’s why I can’t accept that money. It’s better to die than to accept that money!’ That was all. We agreed we would meet the next Saturday to talk again about that. On that Saturday I couldn’t be free before 3 pm. I called him at the mobile phone but he didn’t answer. He had been already abducted”.

On 7th July Floribert was kidnapped and then killed. While he was getting out of a shop he was forced to get in a car by unknown people. The search for him was unsuccessful. Two days after at noon his corpse was found by a motorcyclist. His body bore the marks of beating and torture he suffered during the hours of his captivity.

After the autopsy, Sr Jeanne-Cécile, a friend of his and a physician, said: "He had been tortured terribly, had broken his teeth, as well as his left arm, and there were evident traces of iron on the genital apparatus and on the buttocks ». One can die of corruption. It happens every time the power of ‘corrumpere’ – which means ‘to break into so many parts’ – overshadows the common good. If, on the one hand, corruption seduces and attracts, on the other hand, as Pope Francis reminds, it forces men to get their hearts dirty, prevents the conscience from making generous choices towards others, takes away the freedom to listen to God's voice. This is why corrupt people, instead of distinguishing good from evil, limit themselves to justifying evil (see J. M. Bergoglio, Guarire dalla corruzione, Bologna, Emi, 2013, 12).

Saying ‘no’ to corruption, in Africa and in many other corners of the world, can cost the sacrifice of life. The book offers some possible interpretations of that death. It is not difficult to understand it, even if up to now the facts are not entirely unravelled. Perhaps Floribert’s refusal to the officer who was trying to blackmail him was the reason. Perhaps it was a retaliation for the damaged foodstuffs destroyed. Perhaps powerful and corrupted people wanted to prevent him from impounding and destroying foodstuffs again. In any case, Floribert was killed because, thanks to his faith, he said ‘no’ to corruption. He used to say: “Take the Gospel and read it. It will console you and give you joy”.

In his introduction to the book about Floribert, Andrea Riccardi underlines the strength the defeat of men of peace and faith leaves as a legacy: "This story deserves attention [...]. It is a very sad story, which shows the power of corruption and the climate of violence. But it is also the story of the ‘weak force’ of a young man of faith. It indicates the way of the resurrection of Africa, which begins with the youngsters and lay people".
Floribert’s story is not only a local event occurred along the border between Congo and Rwanda: his silent sacrifice questions everybody along any border of the world, where corruption can be defeated by honesty because – as Floribert used to say – “people’s health is worth more than money”. 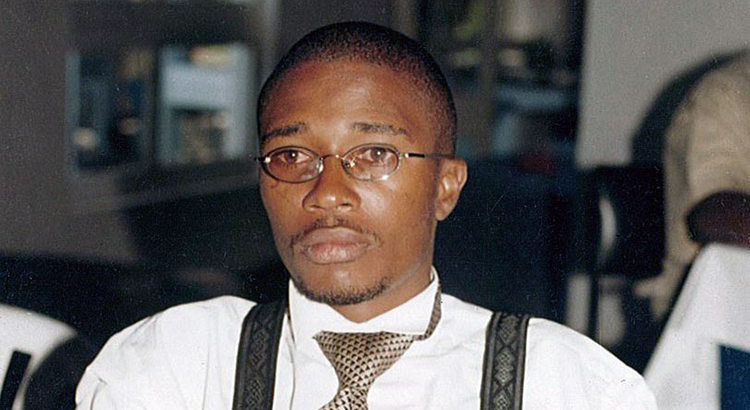 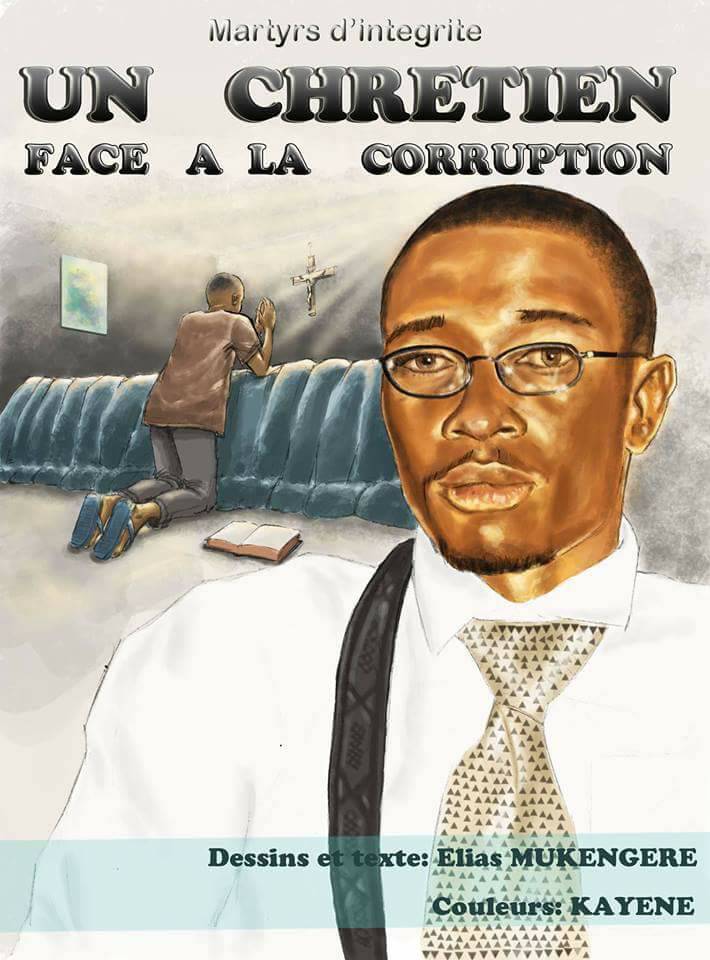