MENU MOBILE
HOME > NEWS > “SANT'EGIDIO, WHEREVER IT IS IN THE WORLD, FEELS TO BE FROM ASSISI AND TO BE LINKED TO THE MESSAGE OF THIS CITY”. HONORARY CITIZENSHIP TO ANDREA RICCARDI.
PreviousNext

“Sant'Egidio, wherever it is in the world, feels to be from Assisi and to be linked to the message of this city”. Honorary Citizenship to Andrea Riccardi.

Today, 24th May, Prof. Andrea Riccardi has been awarded with the Honorary Citizenship for Peace of the City of Assisi. The ceremony took place in the beautiful Palazzo dei Priori. Among the main reasons for this recognition are those of interreligious dialogue linked to the "spirit of Assisi".
Many people attended the event, including more than 100 young people from 39 countries, currently participating to the Sant’Egidio International Congress entitled "Everything can change".

To receive this recognition, which associates me closely with the city of Assisi, is an honour that I believe I owe not so much to the attention to my person, rather to the work of the Community of Sant'Egidio for peace, for the poor of the world, and for deepening the spiritual dimension of human existence. In this way, a bond is created or recognized between Assisi and the Communities of Sant’Egidio that are in seventy countries of the world. For them, Assisi is a reality about which they have heard a lot and of which they have become fond, even if they do not know these places as they live in other continents. This is why I am glad to be accompanied here by about a hundred friends of Sant’Egidio, coming from all over the world, and who are in these days in Rome for an international meeting. I think that Sant'Egidio, wherever it is in the world, feels to be from Assisi and to be linked to the message of this city in a profound way, in an undying bond.
I will say how all this happens, however not before thanking the Mayor and the City Council for this decision; and not before expressing director Tarquinio my deep thanks for his generous words about me and for the friendship with which he has honoured me for years. It is very beautiful to receive a laudatio from a true son of Assisi, who has brought the humanity of this city to all of Italy with a serene and dialoguing, but also firm character. Thank you, dear Marco!

Today Assisi is not a museum, even if a splendid, profitable and appreciated by tourists one. The temptation to become a museum exists always, when so many cities and historical centres of our country become museums and showcases. It is the temptation of wealth that prevails over humanity, of worldliness that prevails over humanism. The true wealth of Assisi is Francis’ humanity. Assisi has a long history, traces of which are its Roman monuments; however this story finds a focal point in the story of Francis, from the thirteenth century a companion of the people of Assisi, of Christians and of humanity. Francis was not a master for a period, but a companion for centuries: here is the secret of the attractive sanctity of Francis who does not fade off with time unlike other saints. The secret - in my opinion - is his poor and simple conformity to the Gospel, his being alter Christus (ndt another Christ).

Francis and Assisi are sources of inspiration and life that do not exhaust. Franciscan memories refer to the walls, houses and churches of Assisi: between memories and roads, each generation sees Francis here and establishes a dialogue with him. As a young man, I too found the saint of Assisi, a man of the Gospel, very close for his simplicity, very rich in life and wisdom: for indeed simple men are the richest and the most complex, the most universal. And Francis leads the encounter with the poor whom he proposes like the compass to be and remain human.

In today's global world, so marked by exclusivist passions, but also by hard walls and heavy conflicts, there is need - more need - of Francis and of Assisi! We must open avenues of peace through human encounter and dialogue! We need to dare peace, because it is a responsibility of everyone and not just of a few specialists: it is our experience. The message of peace of Assisi walks far away. I thought about it when, on October 4, 1992, the feast of Saint Francis, peace for Mozambique was signed in Rome; it was an agreement that put an end to a war that had killed a million people. And I remember that dreams of peace for this unfortunate and great African country were born right here, in 1986, during the inter-religious prayer for peace desired by John Paul II. This prayer has become the mother of many paths of peace between the twentieth and the twenty-first century. I remember, as it was today, the conversations and dreams with exponents of that country and the involvement of some friars.

The prayer for peace, which is linked to the "spirit of Assisi", so dear to Sant’Egidio, does not live only in the great and popular meetings that many know and that continue to be a laboratory of dialogue and human fraternity; but it has become the opportunity to meet and talk among religious leaders on the ground regularly, committing to live together in hundreds of cities around the world. The "spirit of Assisi" has become a method that, in various countries has saved from the religious clash between Christians and Muslims - I think of the conflicts in Ivory Coast a few years ago or in Central Africa Republic. There is an ideal Assisi, a mother of peace, which extends throughout the world. It is not fussy and idealized, because it has a strong link with the testimony of Francis and with the real city of Assisi. It is an ideal Assisi that drives many to want to see it, at least once in their life. We feel we are at the service of this Assisi, a reference point for many seekers of peace and goodness for humanity.

Assisi is not a metropolis that imposes itself by force, but it attracts, suggests, accompanies people like a dream, restless like a prophecy. Here we see how Christianity is capable of generating a humanism that speaks to everyone and belongs to everyone: believers and non-believers, people of different religions. Let us not forget the charm Assisi has on so many lay people. Here we see how the secret of the city is "living together", even if different. Being citizens of Assisi, as I have become today, being friends of Assisi, means creating an alliance with the city that brings its spirit everywhere, but also that makes this city even more a harbour where one returns with fruits, experiences, and problems. It is an alliance of those who, in times that may have become difficult, see in Assisi a lamp of good and peace that helps to wait for the night to pass.

Thank you for this beautiful ceremony and for the honour you give to Sant’Egidio and me today with this citizenship. I am grateful and moved and I repeat to you my faithful friendship. 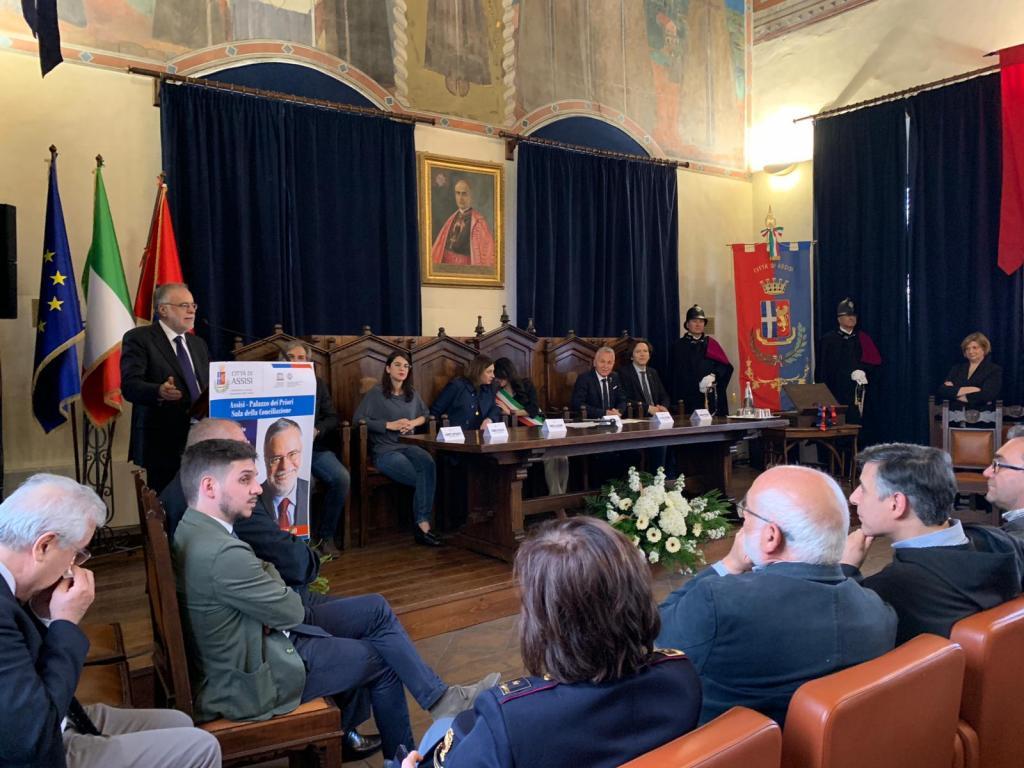 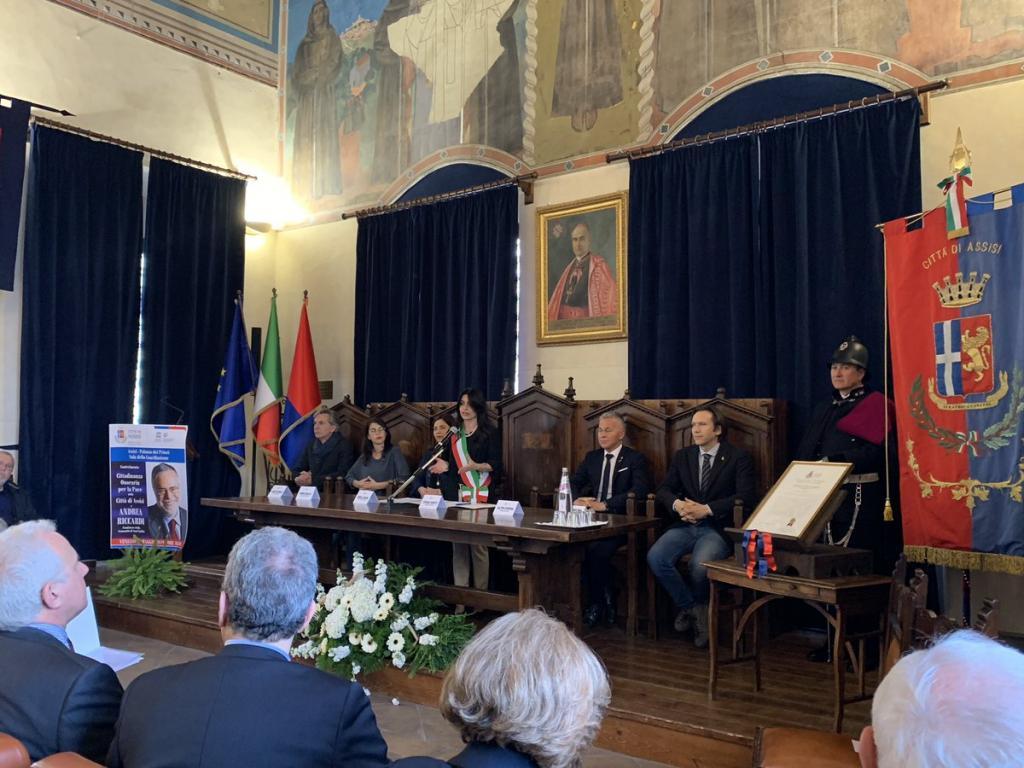 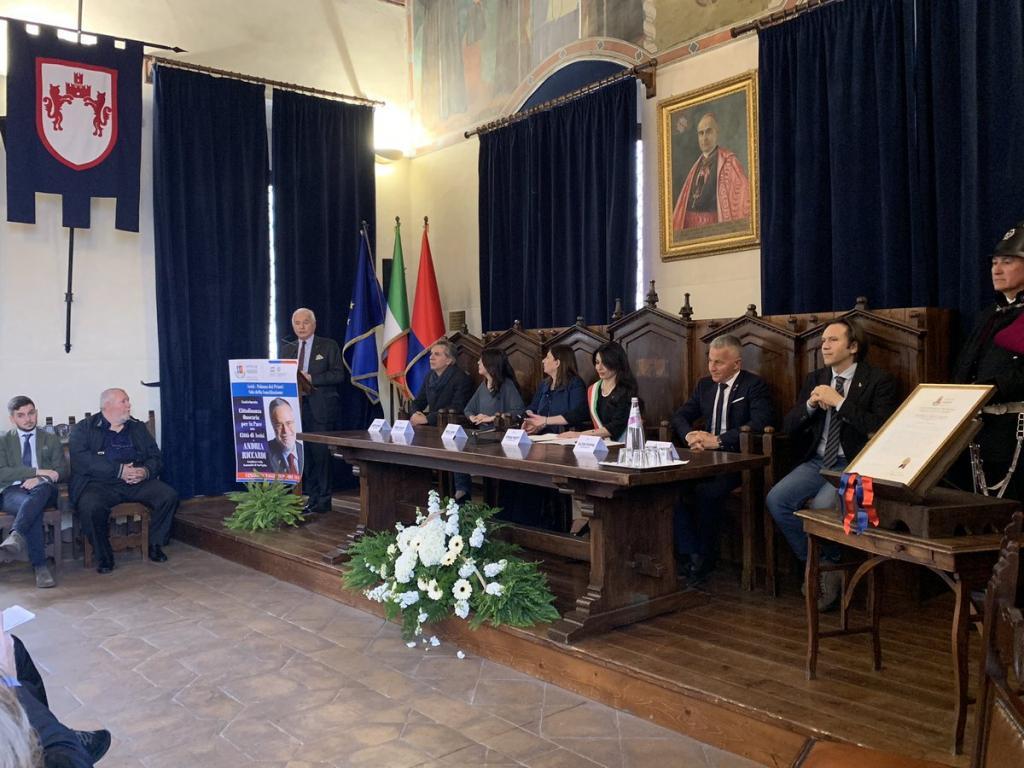 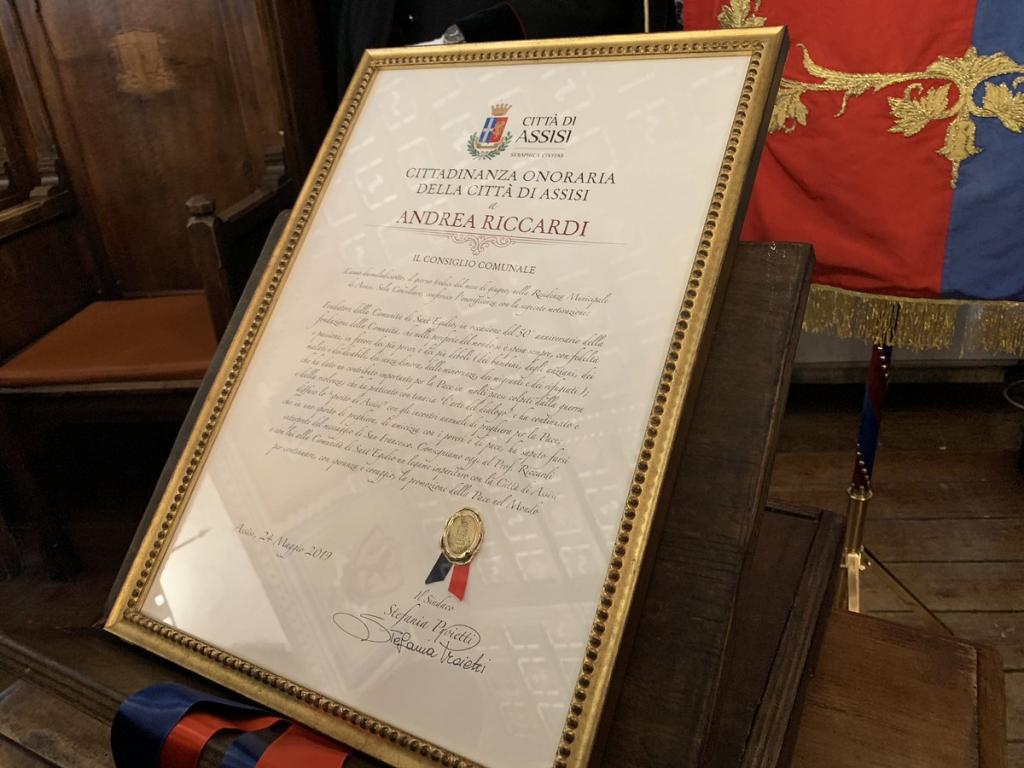 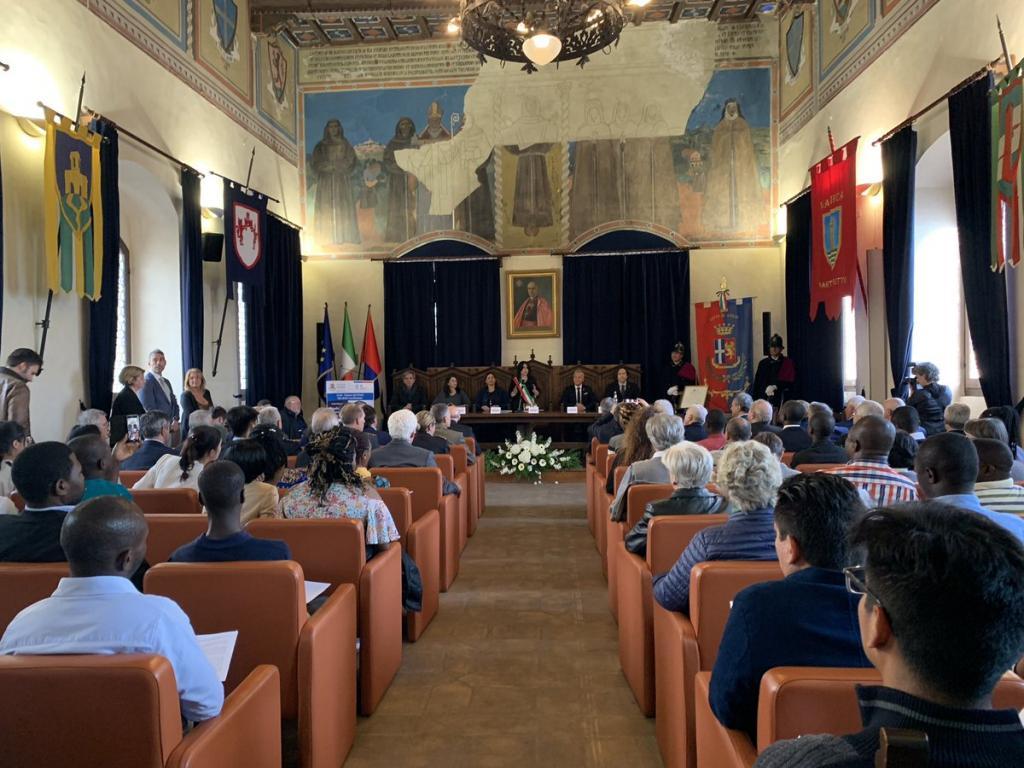 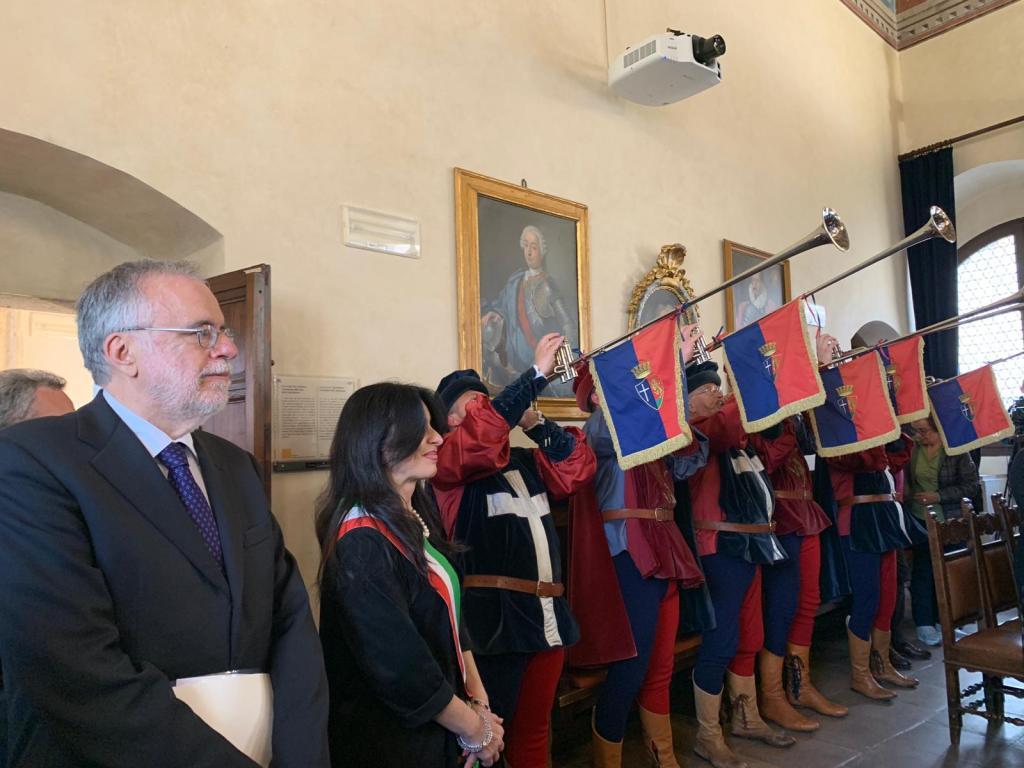 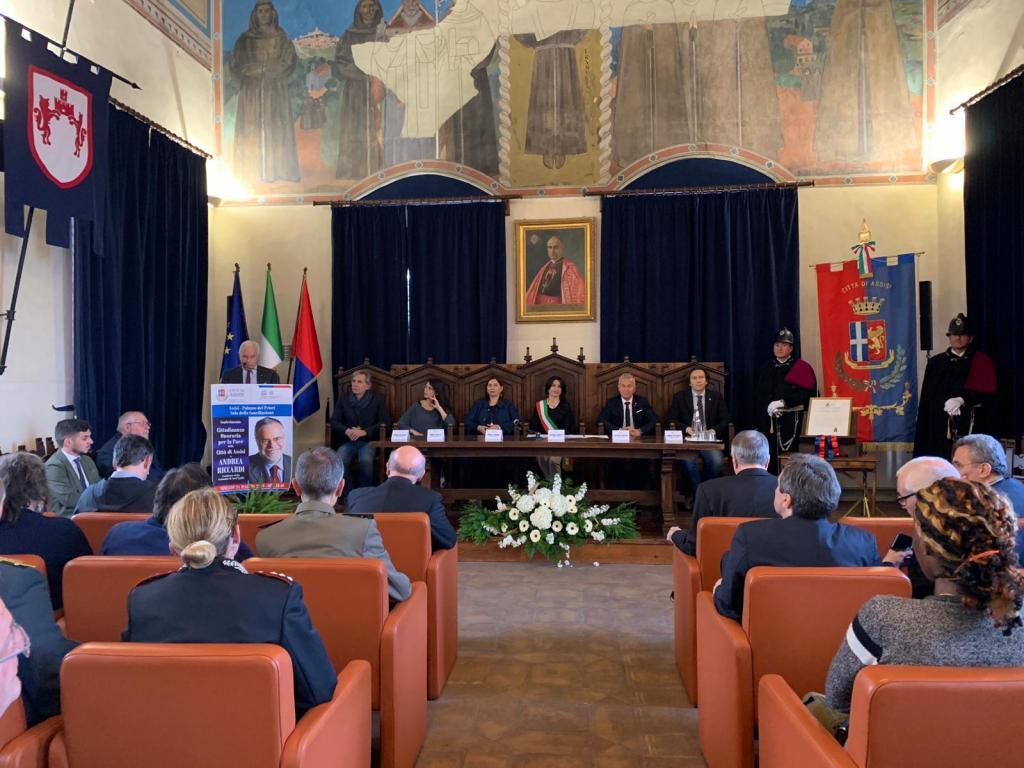